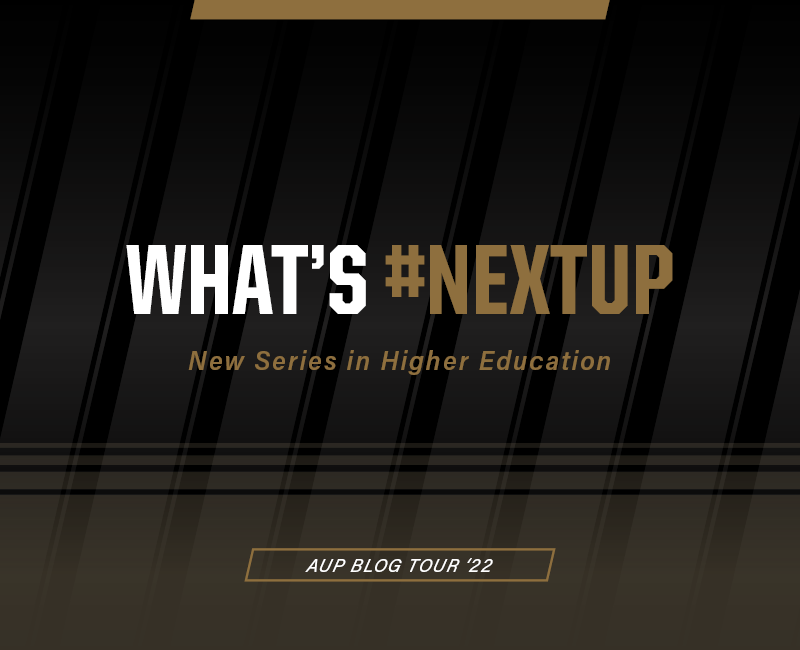 This year’s theme, Next UP, highlights the dedicated work performed by those in the university press community to seek out, engage, advance, and promote the latest scholarship, ideas, best practices, and technology.

We spoke on the phone, which at the time was quaint given the widespread angst around video calls: makeshift offices at one’s kitchen table, pajama bottoms, and scarcely a single meeting where someone didn’t have to gently say, “I think you’re on mute.” After the call we continued emailing. We needed a series title and description, an advisory board, and a plan for project recruitment. Launching a series is a lot of work, and many great ideas never move beyond this stage. I quickly learned that Mangala was as good at organizing and follow-through as she was at producing scholarship. With a focus on intersectionality and identity coupled with authors willing to write in the first-person about their own lived experiences in higher ed, Navigating Careers in Higher Education was established, and queries and proposals slowly started trickling in.

University press publishing moves slowly—that’s intentional. There’s a rigorous process of peer review and editorial board approval. Our goal is not to capitalize on the latest fad, but to publish deliberate, thoughtful scholarship that will hopefully be valuable for decades. Two and a half years after that initial email, we published the first book in the series, Dismantling Institutional Whiteness: Emerging Forms of Leadership in Higher Education. The second book is in production. A third is about to be transmitted to our editorial department. I’ll be presenting the fourth to our editorial board at our next meeting. And several more are in the works. Two and a half years is a long time—particularly the last two and a half years, measured by hospitalization counts and hope for a return to normal. Yet for a series to go from idea to reality to success in such a short time is nothing short of remarkable.

I am proud that I could play a role in making this happen. Academia has been wrestling for generations with the issues that this series covers. Progress has been made, but there’s still a long way to go, and this series exists not just to inform, but to lead to meaningful change. That gives me great satisfaction as a university press publisher. It’s why we do what we do, and it’s rewarding on an intellectual and professional level.

For me personally, though, it’s as much about what the communication between Mangala and me looks like now. Yes, there’s always business to attend to: leads and queries, looking at proposals, searching for good reviewers and interpreting their feedback, supporting the authors in the series every way we can. But I no longer think of Mangala as just a top-notch scholar, but as a friend with whom I’ve developed a warm, trusting relationship, our communication now peppered with jokes and emojis. We advocate for one another, support one another, and cheer one another other on—a human connection forged in the face of social distancing and isolation.

Purdue University Press is the scholarly publishing arm of the University located in West Lafayette, Indiana. Dedicated to the dissemination of quality, peer-reviewed scholarly work, Purdue University Press selects, develops, and publishes valuable resources that add to our understanding of the world. The Press publishes twenty-five books a year and sixteen journals from authors all over the world, in addition to many projects by Purdue community members through its Scholarly Publishing Services division. Learn more and take advantage of special discounts when purchasing books directly at www.press.purdue.edu.