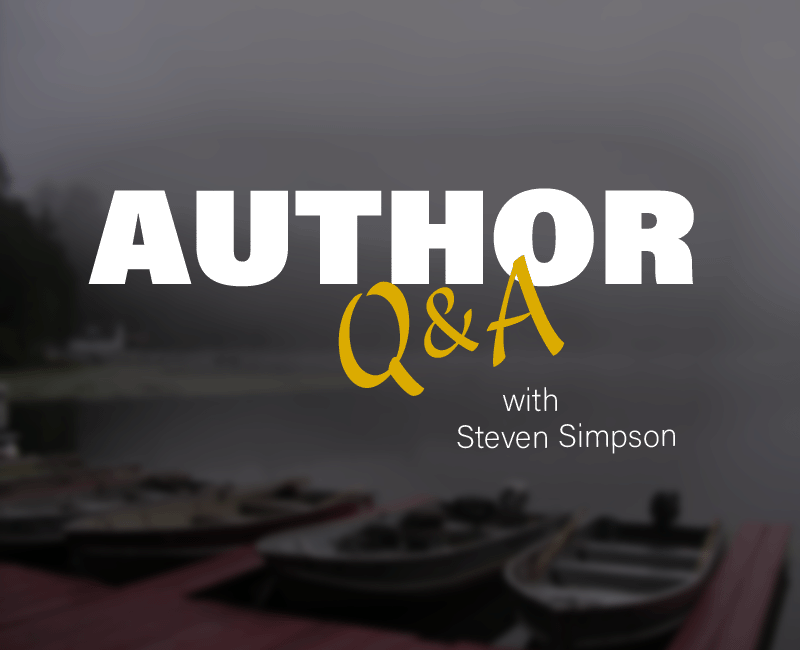 Purdue University Press talked to Steven Simpson about his new book, Essays to My Daughter on Our Relationship With the Natural World.

Essays to My Daughter on Our Relationship With the Natural World is, as the title suggests, a collection of personal essays written to my daughter Clare. I think of them as nature essays, but not the kind of nature essays that focus on vivid descriptions of remote untrammeled wilderness. Instead they are interpretations of people playing in and learning from the natural world. Some of the locations are remote and wild; others are as common as a nearby urban forest. Each essay stands alone as an independent piece of writing, but all are held together by a common thread about the importance of spending time in nature. There are tales are about fishing with otters, paddling with muskrats, and sitting atop mountains at dawn.

The book is divided into three parts. Part One weaves together personal anecdotes with passages from environmental classics. The purpose is to highlight the timelessness of naturalists like Henry David Thoreau, Aldo Leopold, and Willa Cather. Part Two is stories about place. Most of the settings are in the American Upper Midwest (e.g., Wisconsin, Minnesota, Iowa), but a few of the anecdotes take place as far away as Taiwan, China, and Laos. Nature is universal, but it is also regional. Part Three is what I hope will be a unique way of looking at environmental ethics. Most of us don’t need the minutia of academic environmental philosophy, but we do need to use personal experiences in the outdoors to better understand our connections to the natural world.

If I did my job well, the somewhat cumbersome title of the book explains my motivation for writing it. I started writing Essays to My Daughter as Clare was heading off for college. I wanted to remind her to spend time outdoors even after she left home. Four years later she had graduated from college, and I was still at my writing desk trying to finish the manuscript.

During the process of writing the book, my goal, or maybe I should say my target audience, grew. The stories were still written for Clare, but I wanted them to reach a broader readership, especially parents with young children. I think I’ve instilled in my daughter an appreciation of the natural world, and I wanted to nudge other parents to do the same. None of the stories in the book are about remarkable occurrences. This was intentional. Because I worked forty years as an environmental educator, I’ve probably spent more time in the outdoors than most people have, but my experiences are not any more spectacular than anybody else’s. Those who pick up the book will read the stories and say, “I can do those things, I have done those things” and then realize they should spend even more time in the woods, at the beach, and on the water.

This question makes me smile. It suggests that something in this book might be pushing the boundaries of environmentalism. If anything, the book is more old school than cutting edge. The importance of spending time in nature is a theme at least as old as the Romanticism of the 18th Century. In one chapter of the book, “Old and American,” I even discuss whether the threat of climate change has made obsolete my escape-to-nature attitudes. Not surprisingly, I conclude my perspective remains relevant.

In spite of my traditional approach to nature writing, I believe I offer a few fresh ideas. First of all, the personal anecdotes throughout the book are original stories, so the lessons derived from them offer at least a unique twist to the nature-human relationship. Secondly, the book’s simple, non-technical approach to environmental ethics is not something I’ve encountered elsewhere. In the latter chapters of the book, I do not advocate any specific environmental philosophy, but instead provide an accessible way for readers to articulate their own philosophy based upon personal experiences in the outdoors.

Two things surprised me. The first, which probably isn’t the answer you are looking for, is that I was surprised I never tired of this writing project. The book took six years to complete, and pretty much every morning for those six years I jumped out of bed looking forward to a morning of serious writing. I have authored or coauthored a few other books and a bunch of shorter works, but these other projects always reached a point where I wanted them to be done. Essays to My Daughter remained fun right up to the end.

The second surprise was discovering lessons from nature I’d failed to notice when the encounters with nature were actually happening. It took the act of writing about those experiences to bring out the deeper meanings. Sometimes nature hits us over the head with a 2×4 and demands we pay attention. Other times she is more subtle. About a third of the stories in the book were written because the lessons have always been staring me in the face. “Drowning Out All Our Muskrats” and “Birds of Iowa” are chapters of this kind. With some of the other chapters, “Still Fishing” and “A Small Square of Red” being good examples, nature’s lessons did not materialize until I put the stories to paper. There were enough new insights revealed during the writing of this book that stories without an underlying message did not even make it in. I don’t look for meaning every time I hike, fish, or paddle – and I don’t think every interaction with nature necessarily has a lesson. It is one of the reasons we have experience nature often.

Q: You mention that getting [children] excited about nature sometimes comes with an environmental impact and that people who played in nature as children continue to play in nature as adults. Do you have advice for introducing kids to nature in a way that promotes what you refer to as the magical experience? How do we approach these experiences to respect and minimize the potential environmental impact? Does the likelihood of influencing adults to play in nature create a momentum toward conservation that might balance or outweigh the initial impact?

There is lot packed into this list of related questions. First of all, I did state that introducing children to nature sometimes comes with an environmental impact. I didn’t, say, however, that it was a bad thing that needed to be mitigated. I was merely pointing out that kids, when fully engaged with nature, play rough. They go off trail, they touch things, and they collect things. They literally want to taste the wild, which might mean bopping frogs over the head for frog legs, catching crayfish for crayfish boils, or gathering milkweed blossoms for fritters. The preservationist seeds that get planted by such experiences far outweigh the incidental negative impacts they create. I once visited the Seattle Aquarium and witnessed a germaphobic mom yell at her daughter for touching the back of a starfish in a “touch me” tide pool tank. It was not my role to tell a parent how to introduce her own kid to nature, but I cringed as I observed a teaching moment go awry.

You ask about magical experiences in nature. The primary advocate for putting magic into outdoor experiences is environmental educator Steve Van Matre. The primary audience of Van Matre’s books is professional naturalists, and he suggests ways for naturalists to make their environmental education programs more memorable. He believes it is the magic, not the ecological concepts, that leaves a lasting impression. Because educators have limited time with students, sometimes one shot and only one shot, Van Matre claims it is vital to include something “magical” in each and every program.

Parents do not have the same time restraints as interpretative naturalists. If diligent, they expose their kids to nature not once or twice, but a hundred-plus times. Therefore, there is no need to intentionally infuse magic into encounters with nature. Go to nature often enough, and special things happen all on their own. Now that my daughter lives in another city, she and I make sure we go to one of her favorite wild places whenever she comes home to visit. Clare sometimes breaks periods of silence during these outings by asking, “Dad, do you remember that time we…?” Whenever she does that, she is recalling the magic.

Q: Aldo Leopold described environmental changes he witnessed in his environment based on the rings in a tree. You describe changes you’ve witnessed in your environment based on interstate exits between Leopold’s Shack and La Crosse. What do you think the next environmental writer might use as a system of organization to describe change? Do you have any thoughts on how this might relate to the differences in the culture and environment that writer would experience? How do you think these potential changes would be influenced and informed by changes in how society experiences and values leisure [time]?

When I was Clare’s age, I pursued a career as an environmental educator. She, with environmental values not unlike my own, has taken a job at a small green technology firm. In other words, my contribution to saving the planet was to help create a new generation of environmentalists. From Clare’s perspective, there isn’t time to teach children about the role of nature and wait for them to reach adulthood. Education and direct action are not mutually exclusive (in fact, they are complementary), but Clare and her millennial contemporaries realize education alone is not enough.

Thank you for ending this Q&A with a question about leisure. It gives me a chance to finish on a positive note. There is no doubt in my mind that more people than ever are participating in non-motorized, reflective nature-based recreation. This can only be a good thing, even if it makes it a bit more difficult for each of us to find solitude in the outdoors. I really dislike the term “work-life balance.” For one thing, it’s become a cliché, with people patting themselves on the back for spending time with their kids. More importantly, it creates a dichotomy where there shouldn’t be one. In terms of true leisure, the line should not be between our jobs and everything else in life. It should be between the activities we do for their own sake and those we do for extrinsic reasons (i.e., a regular paycheck). If more people find intrinsic satisfaction by spending time with nature (I don’t care whether it is through work or through play), overall quality of life improves.

You can get 30% off Essays to My Daughter on Our Relationship With the Natural World and any other Purdue University Press book by ordering from our website and using the code PURDUE30 at checkout.