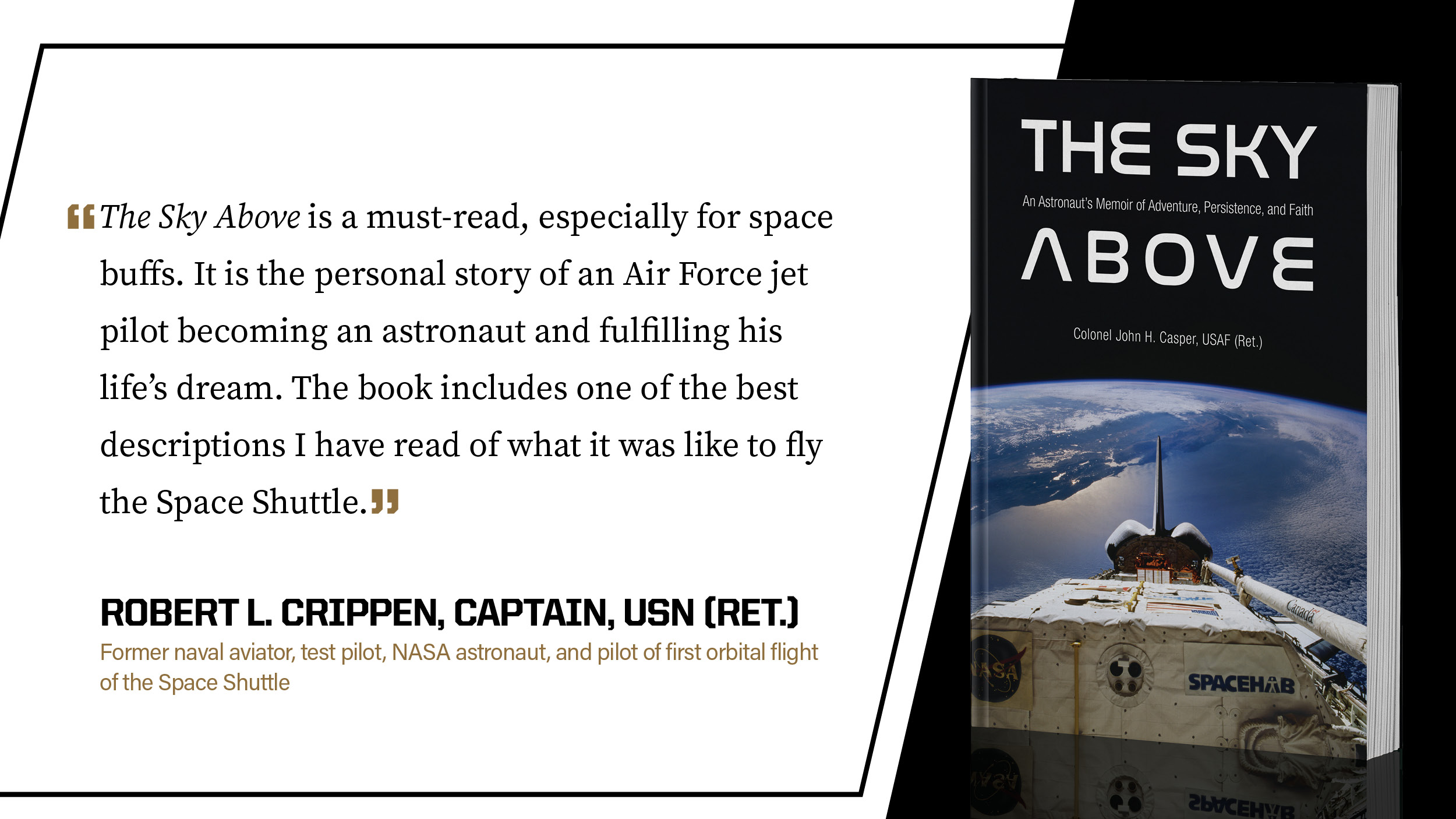 To celebrate National Space Day, Purdue University Press is featuring a selection of our books on NASA, astronauts, and spaceflight.

The Sky Above: An Astronaut’s Memoir of Adventure, Persistence, and Faith
Looking up at the stars at the age of ten, John Casper dreamed of being a space explorer. The Sky Above tells how persistence and determination led to flying in space, after serving the nation as a combat fighter pilot and test pilot. Despite life-threatening experiences and failures, his spiritual faith was pivotal in overcoming life’s challenges. Through vivid storytelling, the reader rides alongside the author in the cockpit, feeling the fear of enemy antiaircraft fire and the pressure of high g-forces during combat maneuvering. His insider accounts of four Space Shuttle missions vividly describe exhilarating launches, the magical experience of weightlessness, and the magnificent beauty of Earth from hundreds of miles above.

John Houbolt: The Unsung Hero of the Apollo Moon Landings
It was a small group of engineers led by John C. Houbolt who came up with the plan that propelled human beings to the moon and back—not only safely, but faster, cheaper, and more reliably. Houbolt and his colleagues called it “lunar orbit rendezvous,” or “LOR.” At first the LOR idea was ignored, then it was criticized, and then finally dismissed by many senior NASA officials.

Nevertheless, the group, under Houbolt’s leadership, continued to press the LOR idea, arguing that it was the only way to get men to the moon and back by President Kennedy’s deadline. Houbolt persisted, risking his career in the face of overwhelming opposition. This is the story of how John Houbolt convinced NASA to adopt the plan that made history.

Spacewalker: My Journey in Space and Faith as NASA’s Record-Setting Frequent Flyer
From the age of ten, looking up at the stars, Jerry Ross knew that he wanted to journey into space. This autobiography tells the story of how he came not only to achieve that goal, but to become the most-launched astronaut in history, as well as a NASA veteran whose career spanned the entire US Space Shuttle program.

Calculated Risk: The Supersonic Life and Times of Gus Grissom
Unlike other American astronauts, Virgil I. “Gus” Grissom never had the chance to publish his memoirs—save for an account of his role in the Gemini program—before the tragic launch pad fire on January 27, 1967, which took his life and those of Edward White and Roger Chaffee. The international prestige of winning the Moon Race cannot be understated, and Grissom played a pivotal and enduring role in securing that legacy for the United States. Indeed, Grissom was first and foremost a Cold Warrior, a member of the first group of Mercury astronauts whose goal it was to beat the Soviet Union to the moon. Drawing on extensive interviews with fellow astronauts, NASA engineers, family members, and friends of Gus Grissom, George Leopold delivers a comprehensive survey of Grissom’s life that places his career in the context of the Cold War and the history of human spaceflight. Calculated Risk: The Supersonic Life and Times of Gus Grissom adds significantly to our understanding of that tumultuous period in American history.

Photographs from the Mercury, Gemini, and Apollo programs tell powerful and compelling stories that continue to have cultural resonance to this day, not just for what they revealed about the spaceflight experience, but also as products of a larger visual rhetoric of exploration.

Piercing the Horizon: The Story of Visionary NASA Chief Tom Paine
Thomas O. Paine served as NASA’s third administrator, leading the space agency through the first historic missions that sent astronauts on voyages away from Earth. On his watch, seven Apollo flights orbited our planet and five reached our moon. From those missions came the first of twelve men to walk on the moon.

As robotic missions begin leaving the earth, Tsiao invites the reader to take another look at the plans that Paine articulated regarding how America could have had humans on Mars by the year 2000 as the first step to the exploration of deep space. Piercing the Horizon provides provocative context to current conversations on the case for reaching Mars, settling our solar system, and continuing the exploration of space.

Wings of Their Dreams: Purdue in Flight, Second Edition
Throughout 100-plus years of flight, Purdue University has propelled unique contributions from pioneer educators, aviators, and engineers who flew balloons into the stratosphere, barnstormed the countryside, helped break the sound barrier, and left footprints in lunar soil. Wings of Their Dreams follows the flight plans and footsteps of aviation’s pioneers and trailblazers across the twentieth century, a path from Kitty Hawk to the Sea of Tranquility and beyond. The book reminds readers that the first and last men to land on the moon first trekked across the West Lafayette, Indiana, campus on their journeys into the heavens and history. This is the story of an aeronautic odyssey of imagination, science, engineering, technology, adventure, courage, danger, and promise. It is the story of the human spirit taking flight, entwined with Purdue’s legacy in aviation’s history.

Dear Neil Armstrong: Letters to the First Man from All Mankind
In the years between the historic first moon landing by Apollo 11 on July 20, 1969, and his death at age 82 on August 25, 2012, Neil Armstrong received hundreds of thousands of cards and letters from all over the world, congratulating him, praising him, requesting pictures and autographs, and asking him what must have seemed to him to be limitless—and occasionally intrusive—questions.

Today, the preponderance of those letters—some 75,000 of them—are preserved in the archives at Purdue University in West Lafayette, Indiana. Dear Neil Armstrong: Letters to the First Man from All Mankind publishes a careful sampling of these letters—roughly 400—reflecting the various kinds of correspondence that Armstrong received along with representative samples of his replies. Selected and edited by James R. Hansen, Armstrong’s authorized biographer and author of the New York Times best seller First Man: The Life of Neil A. Armstrong, this collection sheds light on Armstrong’s enduring impact and offers an intimate glimpse into the cultural meanings of human spaceflight. Readers will explore what the thousands of letters to Neil Armstrong meant not only to those who wrote them, but as a snapshot of one of humankind’s greatest achievements in the twentieth century. They will see how societies and cultures projected their own meanings onto one of the world’s great heroes and iconic figures.

A Reluctant Icon: Letters to Neil Armstrong
Artfully curated by James R. Hansen, A Reluctant Icon: Letters to Neil Armstrong is a companion volume to Dear Neil Armstrong: Letters to the First Man from All Mankind, collecting hundreds more letters Armstrong received after first stepping on the moon until his death in 2012. Providing context and commentary, Hansen has assembled the letters by the following themes: religion and belief; anger, disappointment, and disillusionment; quacks, conspiracy theorists, and ufologists; fellow astronauts and the world of flight; the corporate world; celebrities, stars, and notables; and last messages. Taken together, both collections provide fascinating insights into the world of an iconic hero who took that first giant leap onto lunar soil willingly and thereby stepped into the public eye with reluctance. Space enthusiasts, historians, and lovers of all things related to flight will not want to miss this book.

You can get 30% off all Purdue University Press titles by entering the code PURDUE30 at checkout on our website.